I had heard about some rock art that was out near Indian Hill so I decided to try and find it. I will admit I did not do much homework before I left, I just saw Indian Hill on my topo map and figured I would find it if I hiked around enough.  I had expected and prepared for triple digit temperatures, packing 6 liters of water and some salty snacks in my pack. I also expected and planned for rattlesnakes, bringing my new hiking stick and careful walking technique. I have seen snakes every trip out this season and expected the same for this trip.

I have never been out to Indian Hill or the Dos Cabezas area so I used a Jerry Schads guide to follow the road out. It was bumpy but easy in my 4x4 truck. There was one section right after Dos Cabezas siding that looked as though it suffered from the recent rains, I don't think a passenger car would have made it past that point.

I got a late start being Monday and all, I worked thru the morning and then headed out around noon and arrived at the end of Dos Cabezas around 1:30. The temps were in the low to mid 90's and I don't think it ever got above 95 degrees so it was a mild day for me. I hiked out thru the alluvial wash towards Indian Hill.

Not sure where the pictographs were exactly I started looking at every hill out there. After 3 hours and lots of boulder climbing I realized I was not going to find any rock art. The whole time I was thinking why would anyone now or 6000 years ago climb way up these boulders to draw on rocks..?? I knew I was looking in the wrong place. It was getting late and I decided instead to focus on all of the other really cool things about being in the desert, the beautiful landscape, the solitude, the catclaw stuck in my legs....

It was getting late, almost 5pm and I figured it was time to start heading back to make sure I got out of there before dark and have some spare time just in case I had a flat or some other emergency. When I explore alone out in the back country I tend to be over cautious. I figure I would swing around one last clump of boulders and beeline straight back to the truck. I found a pretty cool cave and then saw some morteros. I thought maybe I was close...

Some of the morteros showed obvious signs of indian occupation and there were lots of Yoni carvings. I kept looking around but did not find the pictographs, they alluded me this visit. I needed to head back to the truck by this point as it was 5:30 and I still had a good 45 minute walk to the truck and another 45 minutes or so of driving dirt road to get to the highway.

When I got home I did more research on the rock art and after looking at several photographs from other sites I realized I was right on it but somehow missed it. I will definitly go back out and spend more time looking not just for the cave but also at all of the other incredible things in that area of the desert.

A few things for this trip out, I did not see anyone else out there except for a lone border patrol officer exiting the dirt road when I arrived. The (2) water containers I looked in were empty and looked run down, like they had not been restocked in some time. No rattlesnakes..wow! I guess during the heat of the day they take shelter in whatever shade they can find. I did see signs of illegals travleing thru the area, faded water jugs, food cans, faded clothing, etc. I saw very little signs of animal scat except near the "really nice cave" where there were heavy concentrations of cat scat. I saw at least 10 large jack rabbits and the washes were full of rabbit and other small animal tracks. I did not see large animal tracks though, just a few small deer tracks.

I went back this week to try and find the elusive cave and was successful. They are still there and still somewhat tricky to find. Temps hit 107 degrees on my truck dash gauge.


I recently started exploring McCain Valley out near Jacumba. It is truly a fascinating place.


McCain Valley lies within the Peninsular Mountain ranges of eastern San Diego County. The valley is characterized by chaparral hills dotted with granitic boulders. Large oak trees provide shady hideaways at two campgrounds off McCain Valley Road. East of the valley, in several steep canyons, oasis of native fan palms are found. These islands of vegetation provide habitat for many desert species, including a population of Peninsular bighorn sheep.
This trip Scott and I hiked out to Sombrero Peak from the Cottonwood campgrounds. It was about 10 miles total and was an easy sandy trail most of the way. The weather was perfect, maybe low 80's and partly cloudy most of the day, we had shade most of the day. We did not see anyone the entire weekend, we had the valley to ourselves.


We did not see any rattlesnakes but we did see a couple of other snakes. I am not sure what this guy is (California glossy snake??) but he was big and looked like he had quite a few morsels in him.  On Sunday we hiked up the west side of the valley in part of the Sawtooth Wilderness Mtns. We saw some pretty cool rock formations and had some great views of McCain Valley extending all the way out to Borrego.

You can see more pics here

Scott speaks to Kumeyaay of ancient past, he believes they live on in the Peak's register box.

This Week in Chollas Creek 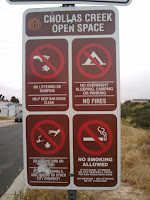 This week in Chollas Creek brought the clearest example of what coyotes are doing in our own backyards. I live in a very populated urban area with some small canyons here and there. One of them is Chollas Creek Canyon. I have been walking my dogs here for more than 14 years and have always seen coyotes, rabbits, squirrels, hawks and other wildlife here. 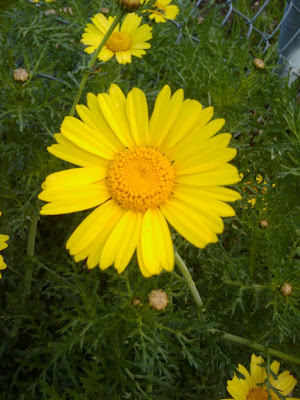 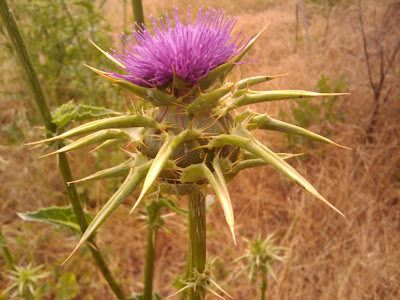 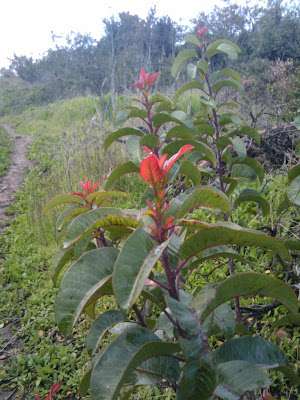 These are the pretty finds in the canyon. Other mornings bring signs of what the wildlife have been doing at night and early morning hours. I have seen the coyotes in my backyard several times and on the street in early morning hours. I have also had them follow me in the canyon with my dog. Needless to say they are wild and kill to survive. The big attraction for them to stay near Chollas Creek I believe is because it does provide water from the main creek and the abundance of shelter in the hills. There are also plenty of opportunities to hunt domestic animals in near by backyards. Some include chickens,cats and sometimes even dogs. These pictures show what I found this morning in the canyon, these are not the first and I will probably continue to document what I find as it may bring more awareness to communities that don't fully understand the wildlife that lives right in their own backyards.

Posted by Daren Sefcik at 3:34 PM No comments: 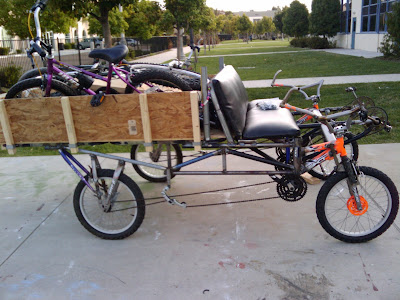 Christopher turns a bunch of old bicycles and other metallic junk into a pedal powered truck.

Posted by Daren Sefcik at 1:00 PM No comments: